Note: I received a copy of this book as an ARC from NetGalley. It comes out next week. I tried to stick to the concepts he describes, but I’m sorry if you see any bias. 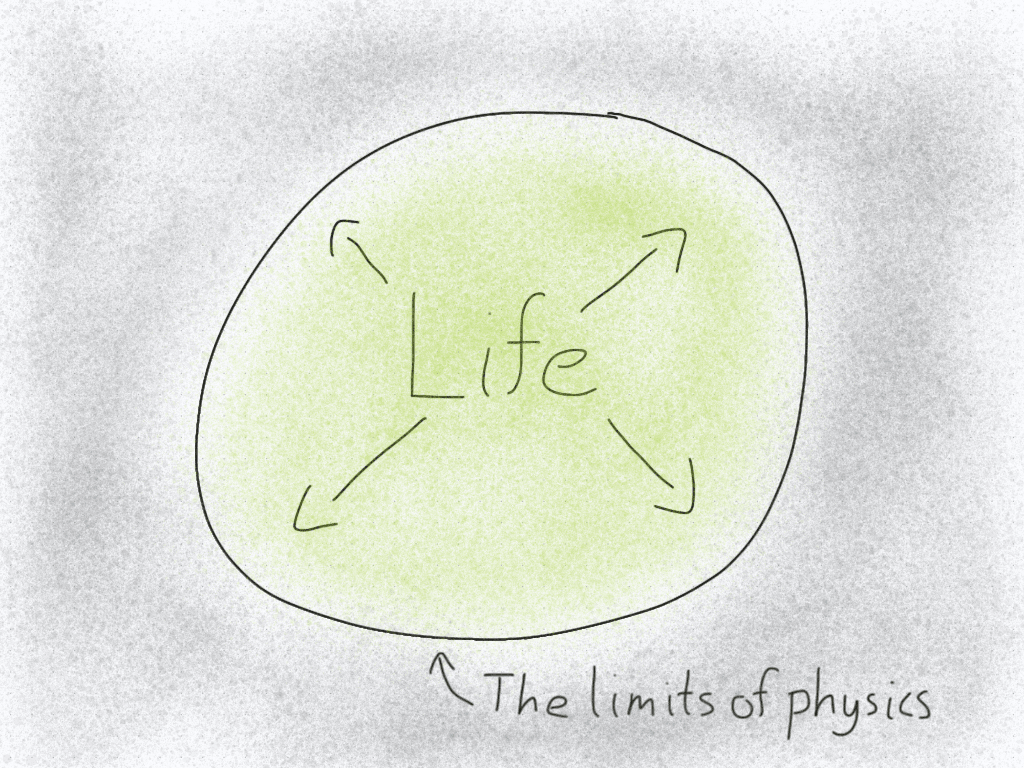 If you ever read a piece describing evolution or biology, chances are you will read something about how life admits infinite variety. Words like boundless and limitless get thrown around quite a bit. These make for nice narratives, but the truth is that life isn’t quite so free to do what it wants.

To be clear, I’m not saying that life isn’t diverse or that evolution is wrong. What I’m trying to get across is that one needs to be careful about what “infinite variety” means.

If you’re talking about the fact that the exact colour of one’s eyes can take on a gradient of values, then sure, there’s a functionally infinite amount of choice. (Eye colour isn’t anything special, it’s just an example.) In that sense, there’s an infinite amount of variety to be found in nature.

However, this doesn’t imply that life can take any form. Biology is beholden to something, and that something is the collection of equations of physics.

Evolution cannot just roam free and explore any form of life it wants. Evolution must comply with the equations and principles from physics. This immediately implies that life has limits, which means life cannot have infinite variety.

In his new book, The Equations of Life, Charles Cockell explores how physics can inform biological questions. It’s a great book that takes simple physical principles and shows how they have consequences for life. He links equations to the qualitative aspects of different life forms in a way that is easy to understand and shows how physics and biology do work together.

An analogy that I found useful was how he explains that the variety of life is more like a zoo than an infinite expanse. While there is room for a lot of variety, life is contained within a sharp perimeter, given by physical principles.

No evolutionary roll of the dice can overcome a lack of a solvent within which to do biochemistry or the energetic extremes of high temperatures. The details, the temperature sensitivity of this and that protein, may well modify the exact transition between the living and the dead, particularly for individual life forms, maybe for life as a whole. But in broad scope, life’s boundaries, the insuperable laws of physics, establish a solid wall that bounds us all together.

One particular characteristic he explores is the notion of temperature. What kind of temperature limits are imposed on life? Is there an environment that is just too cold or too hot? This turns out to be an interesting question where the nature of atomic bonds in molecules plays a large part.

For high temperatures, there is a point in which the temperature of the environment will break the bonds of the atoms that make up the living organism. For carbon-carbon bonds, this limit is about 450 degrees Celsius. After that, the bond breaks. In other words, no more living organism. The important part isn’t the particular value. Rather, it’s the fact that we know we can’t have carbon-based life at a temperature of 1000 degrees Celsius. It just won’t work. There are similar constraints at the high end of temperature for other atoms as well. There’s no getting around them because they are physical principles that apply to everything.

There’s a similar story for the lower end of the range. As Cockell writes, the issue here is that molecules don’t move fast when it’s cold. As a result, any sort of radiation can kill an organism because it will not be able to repair itself fast enough. Imagine you’re building a house and someone is removing bricks faster than you’re putting them on. Even though you keep on working, eventually there is no house left.

Cockell tackles similar ranges in the book, such as pH level. During these excursions, his point isn’t to derive a value and say, “There we go! Life can’t pass this barrier.” Rather, it’s to acknowledge that there does exist a point in which life cannot cross a certain barrier. These barriers can’t be jumped over by clever tricks from evolution. They are a fact of our universe.

This was one of the key lessons I got from The Equations of Life. As a physics student, I found myself interested in the relationship between physics and other sciences. Cockell does a great job of illuminating that relationship. Even if you’re not brushed up on your classical physics, this is a book that will reel you in. Plus, he has a wealth of citations at the end, if you ever want to explore the topics in more detail!